TPT presents “To Vax or not to Vax, that is the question.”
With Meryl Dorey
from the Australian Vaccination-risks Network
and Dr John W. Travis MD, MPH
a medical practitioner who specialized in preventative medicine at John Hopkins..
__________________
Turning Point Talks intended to host an event where we could hear both sides of this important and potentially divisive issue, by having two speakers for, and two against, the covid vaccination rollout. So we contacted various organisations and government departments, and some of our local medical experts, hoping to find someone willing to support the wisdom and benefits of these vaccines. Unfortunately no one supporting the roll out of this vaccine accepted our offer, for a variety of reasons as mentioned at the beginning of the video.
Anyway, the evening was a great success, with over a hundred people attending. There was a Q and A session after the two speakers presentations, which we have not included here. We hope you find these presentations by two very experienced speakers interesting and thought provoking. And we hope you agree that our community needs to be able to hear both sides of this controversial issue.
________________________ 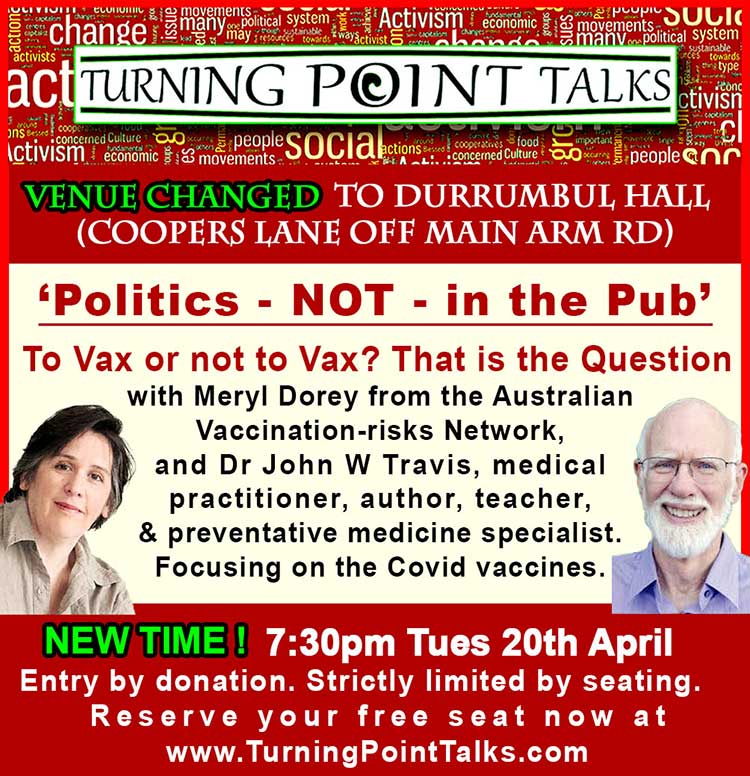 Meryl Dorey is a mother of 4 children, the eldest of whom was injured by his DPT vaccine in 1989 and again by his MMR vaccine in 1990.

In 1994, after a great deal of medical research and meeting many other families with children who had been injured or killed by vaccines, Meryl work with health professionals and parents to form a local organisation in the Northern Rivers of NSW called the Vaccination Awareness Network (VAN). Four years later, VAN combined with many other local vaccination information and support groups to form the Australian Vaccination Network (now the Australian Vaccination-risks Network – AVN). In 1998, 2 AVN Committee Members travelled to Canberra and lobbied Federal Parliament to enact a conscientious objector clause which, until January 2016, guaranteed that no child would be discriminated against in school, preschool or childcare whether they were vaccinated or unvaccinated. We also ensured that no financial penalties would be levied against those families who chose not to vaccinate their children.

In the 26 years since its founding, the AVN has educated, supported and lobbied on behalf of families and health professionals around the country. We have networked closely with national and international health rights organisations and oppose any form of mandatory mass medication without informed consent. We are not anti-vaccination but simply believe that all medical procedures must be a matter of free and informed choice and that the government’s rights over citizens bodies stop at their skin.

Dr. John W. Travis MD, MPH is an American author and medical practitioner who specialized in preventive medicine at John Hopkins. He is a proponent of the alternative medicine concept of “wellness” and co-authored the best selling Wellness Workbook. In 1975 he founded the first “wellness center” in the US and developed the first wellness inventory – used on-line worldwide.

In the nineties he shifted his focus to infant wellness, co-founding the Alliance for Transforming the Lives of Children. This and the birth of his daughter led to an interest in vaccine safety.
In 2000, he moved to Australia, where he has continued to work in the field of adult and infant wellness.
Between 2008-2016, he was an adjunct professor in the Wellness Program at the Royal Melbourne Institute of Technology.
Concerned about the unscientific basis for the international lockdowns at the start of the 2020 pandemic, he investigated vaccine science more deeply. This resulted in his assembling less-widely known facts about vaccine safety to create a simple tool to raise awareness of the problems of vaccines – www.vaccineFacts.info.

The Illness Wellness Continuum is a graphical illustration of a well being concept first proposed by John in 1972.
It proposes that well being includes mental and emotional health, as well as the presence or absence of illness.
John believed that a medical approach that relied on the presence or absence of symptoms of disease to demonstrate wellness was insufficient. As shown in the Continuum, the right side reflects degrees of wellness, while the left indicates degrees of illness. The model has been used to describe how, in the absence of physical disease, an individual can suffer from depression or anxiety. Today depression is rated as the sixth most common illness in our society, perhaps to soon become the most common of all!