Dr. Ross Gwyther retired recently after a career as a geophysicist at Qld University and CSIRO, followed by 10 years working as a union organiser with the National Tertiary Education Union. He has been actively involved in the environment and peace movements for the past 50 years. He is currently Co-convenor of the Brisbane Peace group Just Peace Qld., and national committee member of the Independent and Peaceful Australia Network also known as IPAN.

In media and Government circles there is lots of talk of foreign interference in Australia. Much has been directed at China which in fact only represents 2% of foreign ownership. What is not discussed is the heavy influence of multinational corporations, especially American, which represents 27% of foreign ownership, and British at 15%. Over and over again our industries have been closed down and our innovations offshored. This economic dominance has also led to many tragic political results – not least of which have been impacts on the lives of the young men and women fighting in the Middle East wars of the past 20 years. Sabre rattling over China and constant smearing of Russia, which serves to sell arms but offers little constructive change anywhere.
The Independent and Peaceful Australia Network – IPAN – consists of over 60 peace, community, church and union groups around Australia, including our own “Turning Point Talks” is calling for a genuinely independent and peaceful Australian foreign policy. Australia should not be dictated by the needs of the US investors and government. To that end, IPAN is organizing People’s Inquiry into the impacts of the US Alliance to provide a voice for everyday people into these questions. To be published in November 2021, the Inquiry report will provide a valuable compendium of Australian critiques of the US Alliance and how this weakens Australia.
This talk will touch on the history that has led up to our current situation and the steps that IPAN believes can help Australia have a positive role as a peace-making, and what you can do to create a more peaceful future. 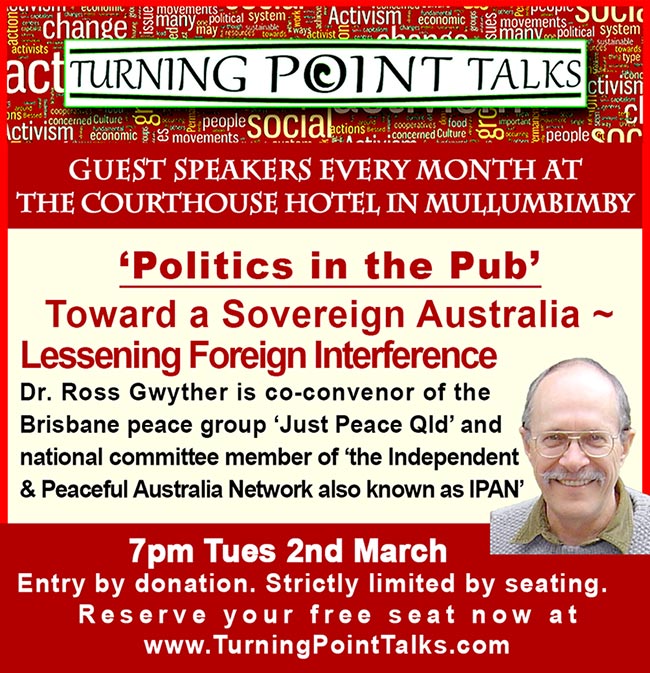 On The Psychology Of The Conspiracy Denier