“Choose while you still can! Which system are you feeding when you feed yourself?“

Byron Shire’s new Agricultural Extension Officer on how to make our land more healthy and productive. 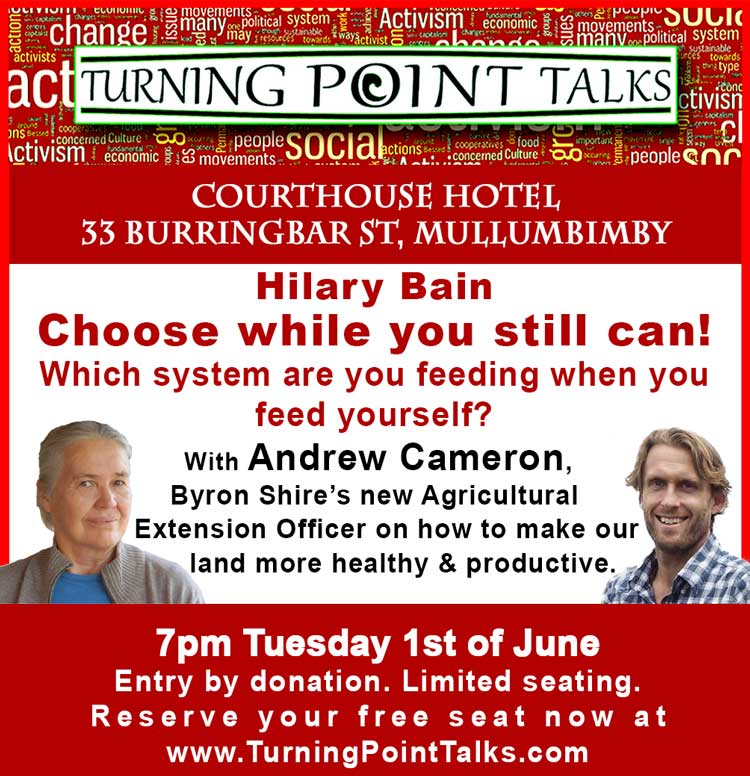 Hilary Bain grew up in Zimbabwe, spent most of her adult life in the arts and travelling the world.

9/11 woke her up to the global geopolitical sphere, and ever since then she has been researching what’s really going on behind the headlines and connecting the dots in how the world is really run.

One subject that particularly interests her is agriculture, it’s the most destructive force in the world, and its very important in everyone’s life, ie we all need to eat, and eating is an agricultural act.

She and her partner produced a full length documentary called The Worm is Turning about the history of the current farming system, how it is enabled by government, how toxic and destructive it is and how we all can change the world by choosing to support and encourage local, small regenerative farmers, and truly be resilient in this Shire.

Right now, there is a frightening pace to centralize and corporatize agriculture all over the world, but particularly in India, where half the population is still on the land.

Hilary strongly believes from all her research, that there is a relentless move on the part of the powers that be, to get full spectrum dominance over all of our lives, by having a centralized food system, controlled by very few people, and a global, digital, crypto currency in a high tech system that is getting information 24/7 from its citizens via their interactions online with a smartphone, ipad or computer, and most public spaces are camera monitored.

George Orwell would be truly impressed with how everything is controlled today and the mechanisms by which they are.

The Byron Shire may be known as a foodie’s destination, but in recent decades, farming in the area has been in a slow and steady decline. Once the backbone of the Byron Shire economy, agricultural sales decreased by $9.6 million between 2010-2015, and between 2012-2016 the Byron Shire lost more agricultural businesses than any other industry. It’s a trend Byron Shire Council is hoping to reverse with the help of new Agricultural Extension Officer, Andrew Cameron.

Andrew, who has been an active member of the local farming community for the past eight years, and has set up and run a number of small-scale regenerative farms, has seen first hand the challenges facing the shire’s agricultural industry. He says one of the biggest shifts for Byron has been the influx of tree changers buying agricultural land. Farms are often bought as lifestyle blocks and become ‘100-acre lawns,’ he says, with no intention of them being used productively. Then there are those who buy existing farms, but lack the know-how to manage them.

Through his role as Agricultural Extension Officer, Andrew will tackle this by offering free support and guidance to help landholders to make their land healthier and more productive, whilst making their enterprise more sustainable, efficient and profitable. “A big part of what I’m doing is to find out where production has been lost and reinvigorate this, and also to make sure farmland that has been bought – that might have coffee or macadamias or orchards on it, or pasture land – is being put to good use.”

Andrew will provide a range of information as well as offering free on-farm site visits to farmers and landholders. He says he can work one-on-one with new or experienced farmers on particular issues and help create solutions to tackle these. Services on offer include an assessment of current production, marketing and sales, offering ideas that may help grow this, and identification of opportunities for further growth or diversification within farming enterprises. Andrew can also connect landholders and farmers with appropriate education workshops and resources that are available within our region through various networks.

Coming from a small business background with experience in marketing and advertising Andrew also has a unique skill set and experience to draw on when providing support for local farmers -not just in the paddock, but effectively getting produce into local market. He says he is also keen to link landholders who are not interested in farming the land themselves, with young farmers who are.

“There are plenty of young people out there who are eager to get their hands dirty and are eager to farm and they can’t get access to property because of pricing,” he said. Andrew says revitalising the Byron Shire’s agricultural sector, using regenerative, sustainable farming methods is an opportunity to create local food security, sequester carbon and boost the local economy. “Tourism and food are tied together here.

“So many people come to the shire because you can get such great food. If we don’t push this and make it part of our economy, we can lose things like the farmers markets. “Now we’ve got those early warning signs, we can listen and do something about it.”

Click here to reserve your free seats on Eventbrite.