Please join our mailing list here, and our FB Group here, to be first to be informed.

Turning Point Talks is honoured to be able to present David Holmgrem on Wednesday,  December 2nd , 7pm at Mullumbimby’s wonderful Politics in the Pub. This series of talks is about showcasing solutions to current ecological and social crises.

David is a favourite speaker among Mullumbimby locals, because his designs are visionary, practical and beautiful at once. He speaks with passion about food, landscape and society, always bringing excellent graphics and delightful photos. David is best known for his collaboration with Bill Mollison to create the world famous Permaculture system.

David lives in Central Victoria, where he and his wife have created a superb permaculture homestead, Melliodora. You can visit this on a virtual tour online. Melliodora is a really important model for future survival. Small farms integrate wild and cultivated elements, recycling, capturing carbon, caring for water and soil in imaginative ways, providing meaning and health for billions. The current broadacre farming is toxic, unsustainable and rarely employs many people.

David’s recent book; “Retrofitting the Suburbs” is about rehumanizing the vast suburban tracts of Australia. Redesigned suburbs can carry twice as many people, enjoying home much more often, relating more closely to the elderly, children and different sorts of workers. Vibrant communities can replace mortgage stressed, ecological and social deserts. And create more food! If we are to experience a large economic meltdown soon, revitalized suburbs will be a key solution to loneliness and hunger.

Moreover, David is an eloquent teacher, who has inspired hundreds of thousands of people. Attendees at this live Zoom presentation will learn and gain hope from his life affirming vision. 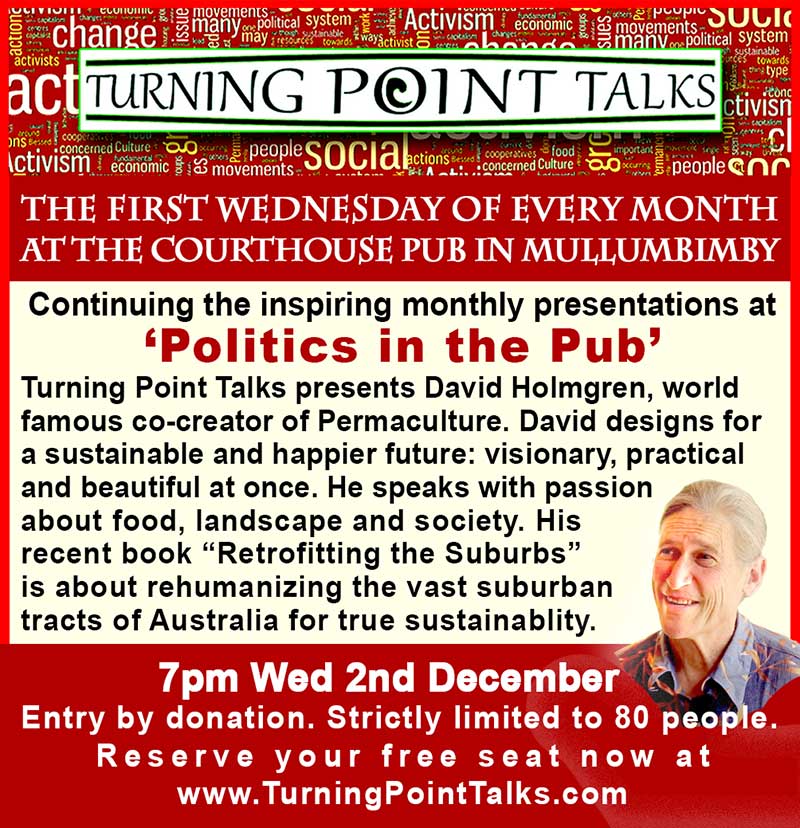 Holmgren first met Bill Mollison in 1974 when Mollison spoke at a seminar at the Department of Environmental Design. This led to an intense working relationship over the next three years, with Holmgren and Mollison sharing a house and garden, putting ideas into practice and collecting useful plant species. Holmgren wrote the manuscript for what would become Permaculture One: a perennial agricultural system for human settlements as he completed his Environmental Design studies, and submitted it as the major reference for his thesis. He then handed the manuscript to Mollison for editing and additions, before it was published in 1978.

Holmgren’s development of permaculture ideas and practices were also strongly influenced by Haikai Tane, as well as the work of P A Yeomans, F H King, Howard T. Odum and Albert Howard.

Holmgren initially concentrated his efforts on testing and refining his theories, first on his mother’s property in southern New South Wales (Permaculture in the Bush, 1985; 1993), then at his own property, Melliodora, Hepburn Permaculture Gardens, at Hepburn Springs, Victoria, which he developed with his partner, Su Dennett.

He started his consultancy business Holmgren Design Services in 1983, designing and advising on a wide range of projects including:

The publication in December 2002 of Holmgren’s major work on permaculture saw a deeper and more accessible systematisation of the principles of permaculture refined by Holmgren over more than 25 years of practice. The book, Permaculture: Principles and Pathways beyond Sustainability (2002a), is dedicated to Howard T. Odum, who died two months before its publication, and it owes much to Odum’s vision of a world in energy transition.

Principles and Pathways offers twelve key permaculture design principles, each explained in separate chapters. It is regarded as a major landmark in permaculture literature, especially as the seminal work, Bill Mollison’s Permaculture: A Designer’s Manual (1988) was published fifteen years previously and has never been revised.

Holmgren is a public critic of the land management orthodoxy of removing all non-native plants despite their ecological functions.

Holmgren’s interest in recombinant ecosystems or ‘weedscapes’ is partly inspired by a 1979 visit to New Zealand and interactions with New Zealand ecologist Haikai Tane (1995). It has also been shaped by Homgren’s interactions and experimentation at Spring Creek Community Forest where an informal network of locals manage a riparian forest of mixed native and non native species, with outcomes including increased recreational use and reduced fire hazard. The site has hosted guided tours and has been the subject of scientific research.

His ‘Weeds or wild nature: a permaculture perspective’ (2011) was published in Plant Protection Quarterly, and he wrote the foreword to Tao Orion’s Beyond the War on Invasive Species.

Influenced by the work of Nicole Foss, Holmgren’s more recent work has also taken into account the possible impacts of a global financial bubble burst.

Holmgren argues that Australian suburbs can be effectively retrofitted for liveability, resilience and sustainability through strategies such as home food production and preservation, building retrofits and behaviour change. An early version of these ideas, ‘Retrofitting the Suburbs for Sustainability’, was published by the CSIRO in 2005

Holmgren created the fictional story ‘Aussie St’ to illustrate both the changes in Australian suburbs since the 1950s, and a possible resilient future.

His work on retrofitting the suburbs culminated in 2018 with the publication of RetroSuburbia: the downshifter’s guide to a resilient future. The work is both a manifesto and a manual on how Australian suburbs can be transformed to become productive and resilient in an energy decent future. It is divided into three fields for action – the Built, the Biological and the Behavioural – and contains real-life case studies and an update of the Aussie St story.

Holmgren’s home and major development site since 1986, “Melliodora” is a ​2 1⁄4-acre property situated at the edge of Hepburn Springs, central Victoria. It is one of the best-documented and well-known permaculture demonstration sites in the world. The passive solar house, mixed food gardens and orchards, dams and livestock, and creek revegetation in the nearby public land show how permaculture design can help restore and improve land, and provide for residents’ needs and enjoyment in a cool continental inland climate.

Astrological Predictions for the coming year.